Sale on now. Save on many of our pendants.
Click here to go to our online store.

Note: The Online Store is on our sister site: Quantumpendants.org

The #1, MOST important thing to understand about the Scalar Pendant is that it puts us BACK in TOUCH with the earth!

It’s no coincidence that there has been a massive alarming shift in health problems with the technological revolution over the last 30 years. The replacement of natural environments full of negative ions and earth energy for man made environments full of EMFs and positive ions has had an extremely detrimental effect on our health that will only become truly apparent in the next 10-20 years.

THANKFULLY Scalar Pendants with concentrated volcanic ash exist! They emit negative ions and earth based energy frequencies that benefit the body on a continual 24/7 basis for life! They work primarily by balancing out all the negative man made energy and frequencies we cannot avoid every day of our lives!

If you want to know more about Scalar Energy Pendants, you can click on the link below to get a free copy of our downloadable ebook. 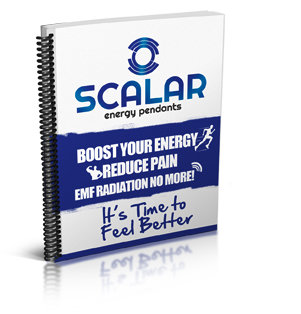 How Will You Feel?

How will YOU feel from wearing a Quantum Pendant?

You will Have MORE Energy and you will Feel MORE Relaxed.
You will Have MORE Concentration. Essentially EVERY side effect you are experiencing as a result of technology will be reduced.
Think about how you feel when you walk barefoot on a beach or take a walk through nature (where there is an abundance of negatively charged electrons). Now consider the fact that you could wear or carry something with you every day that can give you a piece of that. Wouldn’t it be worth having?

How many unknown symptoms are you suffering from? How much better could you feel? Health isn’t about dramatic immediate shifts but gradual changes for better or for worse. Our technological laden environments have gradually reduced our overall health to levels to which we've become numb and jaded. We no longer REALIZE just how much better we SHOULD be feeling.

Do you ever find it odd that you feel so much healthier when you are out in a natural environment? You assume that it’s just the air? Did you know that FRESH, healthy air is like that BECAUSE of the negatively charged electrons in the air. Take them away and nature wouldn’t have nearly as much of the invisible draw that it does.

So in a nutshell, a Quantum Pendant provides relief from numerous symptoms while giving you a defense against the modern electronic world we surround ourselves in. A Quantum Pendant is truly the only real protection we have in our modern world against our ever growing technological bubble.

There are seven styles of pendants as shown below. All are priced in US dollars.
Order Pendant(s)
(Goes to our main site)

Buy In Bulk And Save

Buy In Bulk
(goes to our online store)

We have a number of related products, including Scalar Energy Pet Tags for your pet. Click on any of the boxes below to get more information and to purchase these products (links to our main site).

How Do The Pendants Work?

The pendant emits deep earth energy which comes in the form of negative ions as well as deep earth frequencies.

The combined effect provides numerous benefits to the body or any biological life form for that matter!

The ions help separate blood cells to allow for improved circulation. Where negative ions have an expanding effect, effectively allowing them better oxygenation, positive ions which we are commonly exposed to in indoor air environments create constriction. This leads to less oxygenation of red blood cells and fatigue is the end result. This however is just one aspect of the benefits the pendant provides.

Negative ions are also integral to the flow of hormones in the brain. With improved negative ion levels in the body, an individual will experience improved levels of serotonin and dopamine due to the fact that the ions are allowing for better transport of hormones between receptors.

The pendant also carries with it grounding earth based frequencies including the popular Schumann resonance.

Radiation is generally not well understood. Some people believe that any radiation is bad but the fact is that low levels of radiation are normal and beneficial. These pendants would need to be 26 times stronger before they would start to be

Are The Pendants Safe?

A question we treat very seriously. The answer is… Absolutely!

We have done A LOT of research not only on the pendants themselves but the entire concept from which they work. We NEEDED to be certain that these pendants would only help. With all the mis-information out there we wanted to put some clarity to the issue.

The pendant is made from 100% natural materials, all of which have been tested, checked and certified to contain compounds that emit energy well within safe limits for human exposure.

Natural deep earth minerals ALL emit some form of earth based radiation (which isn’t just safe but healthy!).

Low level radiation is normal and beneficial. These pendants would have to provide 26 times their actual output (measured in milliRems) before they would begin to be more harmful than beneficial.

Are These Pendants Right For You?

Are you surrounded by computers, cell phones and other EMF radiation sources all day?

Do you find your energy is always low and nothing seems to help?

Do you wish to expand and enhance your meditation and energy work?

If your answer to these questions is yes, then Scalar Energy Pendants could be very helpful. They can provide protection from EMF radiation.

How Long Will These Pendants Keep Working?

The pendants work by emitting a form of energy that will literally last hundreds of years. They will certainly last a lifetime and still be working fine.

Are The Pendants Guaranteed?
We Guarantee if your pendant breaks or chips for ANY reason within 1 year of purchase we will ship out a replacement, all we ask is that you pay the shipping.

Money Back Guarantee – Not Satisfied with the Pendant? No Problem! Send it back within 365 days to receive a full refund (minus additional shipping fees or return shipping fees).

What Our Clients Say

"The results were amazing. I rarely get headaches, but happen to have a severe one the day my pendant arrived in the mail. Excited, I put it on right away. What I didn’t expect was that my headache would disappear in minutes. I couldn’t believe it. Since I have been wearing the pendant, my back pain has all but disappeared. If I do something to cause me low back pain such as lifting wrong, I recover within a few hours or by the next morning. It is unbelievable. The most important thing of all, and the reason I gave the pendant a try, is that my energy has increased tremendously. I feel great. Wearing the scalar energy pendant is the single most effective thing I have ever done to increase my energy and health. I never take it off. I will wear a pendant the rest of my life – I would never want to lose the benefits I have achieved or the health I have gained."

Stephen
"The pendant began shifting and adjusting my energy as soon as I put it on. I’m a naturally ungrounded and sensitive person and it helps to pull me down to Earth and stabilize. Now I keep it on all the time because, like a wedding ring, it has come to represent my commitment to serving this world. With it, I find strength and duty fairly easy to come by; without it, not so much. Also, it makes me feel like a modern day alchemist; I love it!"

Skylar
Reilly the 13 year old irish water spaniel had just gone through a procedure to remove 2 cancerous lumps off his rear end. Due to the circumstances, the vetrinarian had to leave 1 lump. We decided to attach one of our Scalar Energy Pendants to him since it had been helping us feel so good we figured why not. Well since he has begun wearing it (5 Weeks Now) he has had more energy than in years and the tumor appears to be shrinking as well! Now I have to order another one because we don’t want to take his off his collar.
-Robyn Brann, Ontario, Canada

(UPDATE : It’s now been about 4 months since Reilly began wearing a Scalar Energy Pendant on his collar. Reillys tumor is now 90% gone and his energy is like that of a 5 year old dog and he’s receiving many comments about how energetic he is now especially for a dog his age.)

Reilly
Irish Water Spaniel
"After wearing the pendant, I did not notice any apparent change initially but after roughly about 30 days things started to be different. Without being aware, I do not experience the previous symptoms. I don’t experience the static electric anymore. I also don’t have migraine anymore. For me these are the most obvious effect as until today I don’t experience static electricity and migraine. And these were the issues that brought most unease to me. Nowadays I never visited clinics due to migraine anymore. About my energy level seems increased. I wake up refreshed and did not miss alarms again. I don’t know how true is this as our energy level is also affected by our emotion. However, it seems that I’m more aware of my emotion now. Also having enough energy to talk myself out of bad emotions every now and then. I’m more easily listen to myself on the positive side. If this was also contributed by the pendant then this is really a good news. I’m grateful to get to know you and purchased a pendant from you."

Vilzen
"I was 50/50 about buying a scalar pendant, but when I saw that Ryan was offering the pendants at a reasonable price in addition to giving a 60 day money back guarantee, I didn’t think I had much to lose. And the fact that it was easy to order, and my questions were answered promptly clinched my decision to buy my pendants from him.It’s been a little over a month of wearing the pendants daily and so far my 4 year old son and I are benefiting from them. Previously my son would catch colds from his kindergarten class, and full recovery would sometimes take weeks. Since wearing the pendant though, he has had only one day of fever, spiking at 38.9 degrees Celsius. By the next day, his temperature was normal and he showed no signs of sickness. As for me, I’ve found that I have increased energy, mental clarity and concentration. I used to be drained from taking care of my kids all day and had no energy or desire to do anything else but veg at night. Now, I can keep up with my two active kids and when they go to bed, I still have enough energy to work on my creative projects. I can’t say for sure that the pendant have prevented colds for me, since my immune system is fairly strong. However, I know for certain that somehow my pendant is shrinking a pea sized cyst I have on my ring finger. I developed this cyst 3 years ago while I was pregnant with my second child, and it just never went away. As of right now, the cyst is 85% gone. I keep asking my husband to feel the spot on my finger just to make sure I’m not imagining things! All in all, I’m happy that I purchased these pendants from Ryan, and I’m thrilled to discover that the things I read about scalar pendants are actually true."